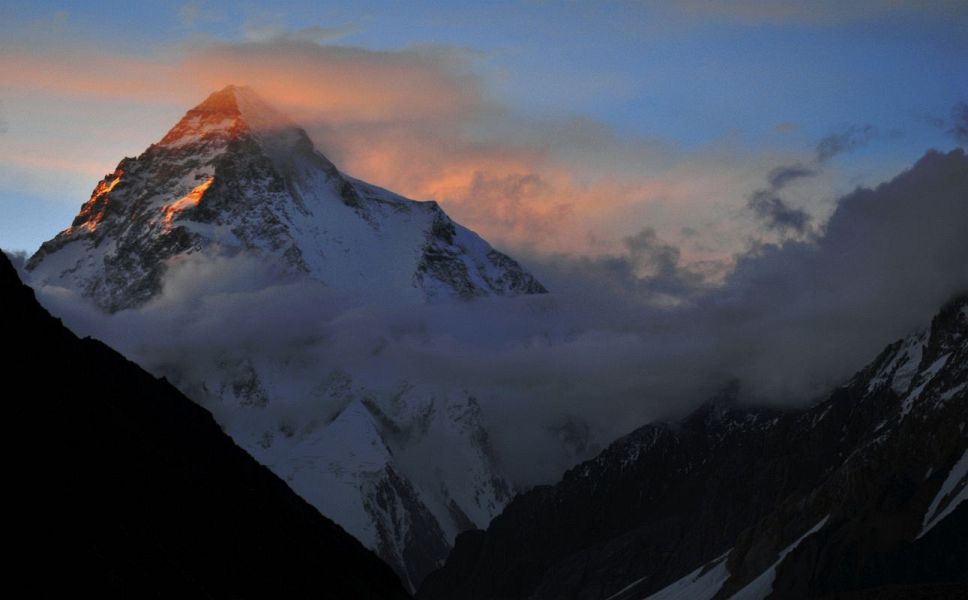 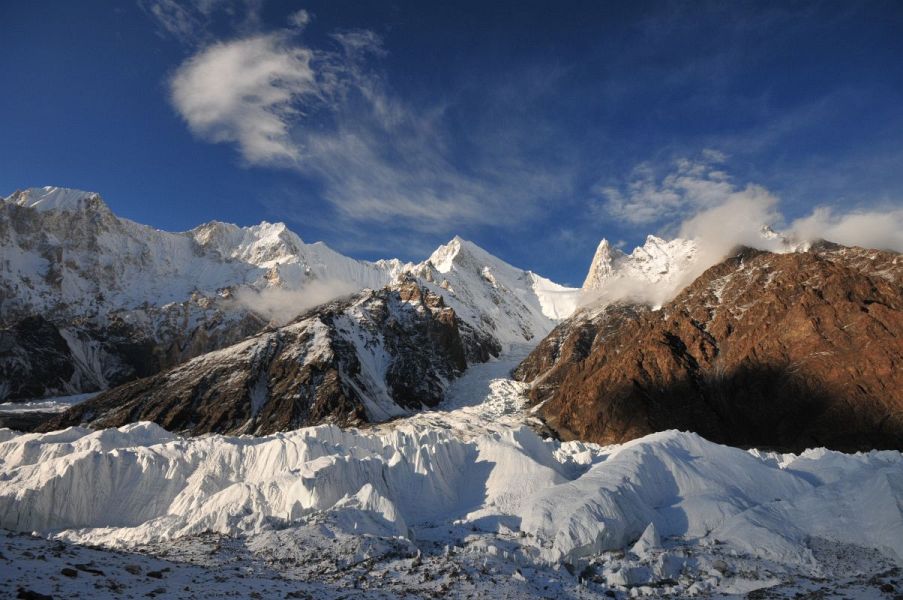 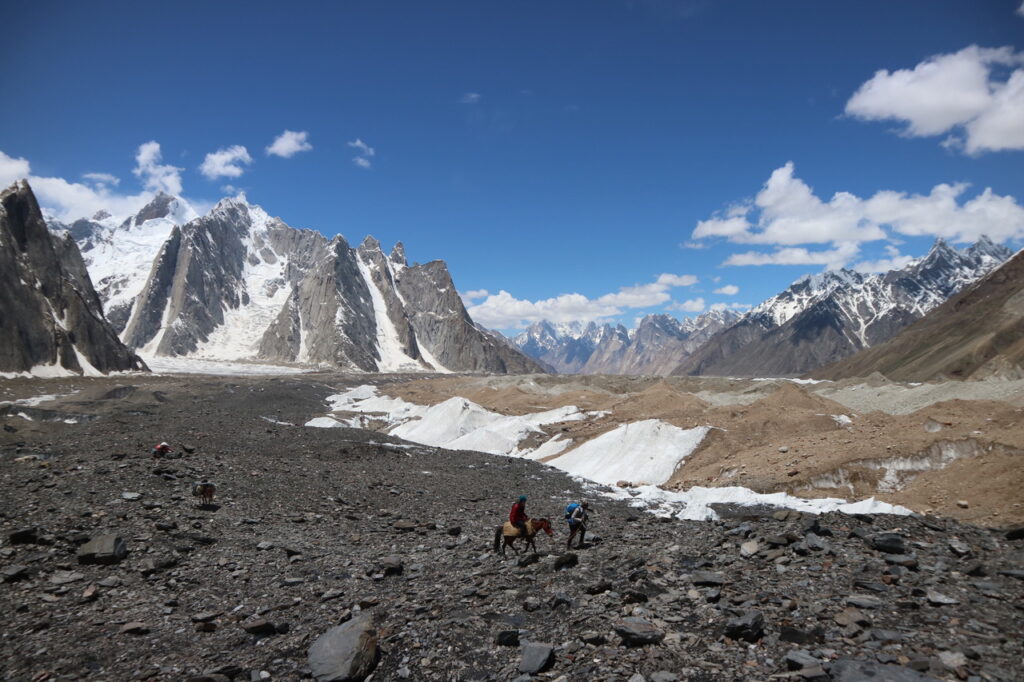 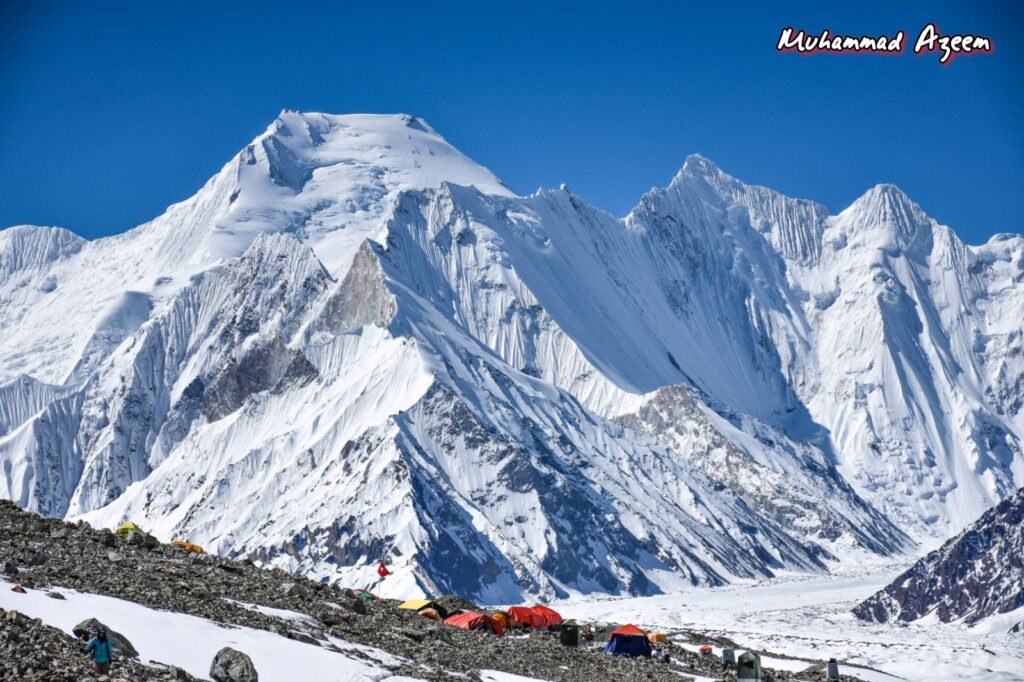 Skardu the charming capital of the Baltistan region is the starting point for the mighty K-2. We cross a beautiful lush green fertile and fruit-laden Shigar valley and drive as far as Ascoli, the last inhabitant before falling into the throne of mountains.

Walking on the unpredictable but charismatic and enchanting Baltoro Glacier, we glimpse several famous and beautiful mountains towards K2. Finally, we arrive at Concordia, the junction of Baltoro and Godwin Austin Glaciers with several other tributaries and a place serving as the base for the four giants of Karakorum, i.e. Gasherbrum II ( 8035m ), Broad Peak ( 8047m ) and Hidden Peak or Gasherbrum I ( 8068m ) dominated by the king of the mountains, K-2 ( 8611m ).

Do I need visa for entering Pakistan and what If I am already in the country ?

Yes, all Nationalities need a valid visa to enter Pakistan. However, many nationalities can get visa on arrival in Pakistan.
A tourist visa (visit visa) is required to come to Pakistan for trekking.
People on work visas (already in Pakistan/abroad) require a No-Objection Certificate (NOC) which normally takes up to 6 weeks. To apply for a tourist visa online, we advise you to read the details given on the official visa portal at the link attached and apply for Mountaineering and Trekking visa.
Visa Link: (https://visa.nadra.gov.pk/)

How much money should I carry for miscellaneous Expenses and Tipping?

For expenses other than your holiday cost, you can carry approximately 230 EUR/250 USD/200 GBP /9,000 Thai Baht, 100AED (or equivalent in your own currency). This can be used for other expenses including tips for porters and supporting staff. You can purchase Pakistani Rupees (PKR) upon arrival at the airport at good rates. US Dollars, Euros and Pound Sterling can quickly be converted into the local currency at the airport.
The porters are paid in Pakistani Rupees, not to mention everything else you may want to purchase in Pakistan. US Dollars will have an advantage of being easily exchanged at even smaller towns but we recommend one-time exchange. Credit cards can come handy for shopping in Islamabad for souvenirs/gift items including rugs. Automated Teller Machines (ATMs) will be available in Islamabad and Skardu but using your debit/credit cards, you will only be able to withdraw Pakistani Rupees from ATMs.

What about Food and Meal plan?

During K2 Base Camp Trek, participants will be served all three meals (breakfast, lunch and dinner). The food will include combination of Pakistani and foreign meals made of ingredients bought in Pakistan. Breakfasts will include coffee, tea, cereals, eggs, porridge/muesli, chappatti/bread. During trekking, lunches will be eaten during lunch breaks with options from tinned/canned meals (fish, meat), crackers, pickles, cheese, chapatti etc. Depending on the weather, the lunches start with or sometimes end with soup, noodles, coffee or tea and biscuits etc. Our three course meal (dinner) is always eaten in mess tent which is freshly prepared by our cooks travelling with us. The dinner will start with soup and end with sweets. During the initial days of trekking, fresh vegetables are also cooked until they remain fresh. Vegetarians must inform our office in advance if they want their entire meals to be vegetarian.

What is the food plan for vegetarians?

During the initial days of trekking, fresh vegetables are also cooked until they remain fresh. Vegetarians must inform our office in advance if they want their entire meals to be vegetarian.

What about drinking water?

Iodine treated drinking water will be made available in the mornings, during breaks and while camping. Everyone will be drinking spring water when available but at other times, we do not have options other than consuming glacial melt water that might consist of silt. Our kitchen uses a large container for water supply that helps in settling down the silt at the bottom. If you do not like the odor of iodine, you might want to bring your own supply of bi-carbonate of soda. Conventional methods work well for everyone but we keep on experimenting new methods.

How to reach Skardu if participating only for the Trek?

In order to reach Skardu (northern areas), there are several departures available from Islamabad, one or two flights are available from other cities on specific days, like Karachi and Lahore with PIA (Pakistan International Airlines) and Air Blue. The flight is subject to weather as the valley is surround by mountains and requires high visibility for any flight to operate. Due to the weather factor, no flights are guaranteed to operate. Flights to Skardu do operate often but there are always chances for cancellations and in that case we keep road transport as backup and on standby for our clients who book with us from Islamabad to Islamabad. However, if you are joining us from skardu, you can also book a private car or a public buses from Pirwadai Bus station Rawalpindi/Islamabad.
We cannot take the risk of waiting for another day in Islamabad for another flight for good reasons including complex airline booking system, tourist traffic flow in flights etc.

What if we like to travel on Karakorum highway?

Journey on Karakorum Highway is one of the best experiences in Pakistan for any foreign or domestic tourist, providing views of amazing natural environment and indigenous people throughout the road trip and never has any of our guest openly regretted traveling by KKH. We strongly advise that you contact and gain more information from your travel insurance company regarding road traveling coverage. If your company does not offer full coverage for your trekking holiday, you might look for other companies.
Please take note that incase one or both internal flights cancel, we will drive on Karakorum Highway.

How to manage Tipping?

It is common that our participants at least tip the porters for their hard work carrying participant luggage and supplies. If you feel satisfied with the services of the guide, assistant(s), kitchen crew, you can contribute to the total tip. 95-120 Euros (or equivalent in your currency) would cover this element of the total expenses. The tour leader/guide helps all participants in deciding a tip for all crew members of the Trek. These tips are then handed over as a group in a “thank you” ceremony organized at the conclusion of the trek.

How about the Baggage Allowance?

Porters discussed above will be carrying your baggage/luggage apart from supplies, equipment etc. The maximum weight limit for your packed trekking bag is 13 kilograms. The load of your sleeping mattress and sleeping bag is included in the maximum limit. Please only bring required items on the trek. It will be possible for you to leave parts of your luggage at the hotel in Skardu. If you bring more than 13kg, you will be charged 2$ per kilograms per day.

Do I need Travel Insurance?

For joining, K2 Base Camp Trek you need a valid travel insurance policy to cover the cost of medical treatment and to protect the value of your holiday in the event of cancellation and evacuation. When taking out insurance please ensure the policy you choose covers you for the activities and altitude included in your itinerary.
For appropriate insurance, we recommend World Nomads (https://www.worldnomads.com/row/travel-insurance).

What equipments to pack for K2 Base Camp Trek?

How about Batteries and Accessories?

You may require portable chargers, extra batteries and storage cards etc during your holiday in the mountains. We ask you making a relevant list of sockets, adapters and other electrical items you might need to keep your devices last as long as possible.

How to train for the Trek?

It makes a lot of sense to spend some time before coming on a trekking holiday getting some additional exercise. The fitter you are, after all, the more enjoyable you will find the experience. For this trip you need to be aerobically fit and also comfortable with walking on a variety of terrain including loose scree and boulders for between 6 and 8 hours on most days. We would suggest that you adopt a weekly exercise regime leading up to your trip. Regular hiking in hill country is the best training but running, tennis and swimming are also good for developing cardio vascular fitness and stamina. Before departure, we suggest that you try to fit in a number of long walks in hilly country.

How about Weather Conditions?

During your holiday, you can experience maximum temperatures of up to 45 °C in Islamabad, 30 °C in Skardu and 26 °C in Askoli. The days will be warm (unless clouds take over) until we arrive at camp in Concordia where temperatures during the day will decrease to less than 10 °C.
We might walk on snow on Baltoro glacier’s higher part in June and this snow normally melts by mid July. In August and September, you might experience snowfall depending on how the weather turns out. Temperatures in the Karakorum Range are unpredictable. Temperature might decrease down to -10 °C during any time of all trekking periods while camping anywhere between Paiju and Concordia. In September, it can go even lower than -10 °C. Monsoon does not fully affect the Karakorum Range. However due to past experience with unpredictable weather, we must be prepared for unfavorable weather conditions.

Once paid, the deposit is partly-refundable as part of the paid amount will be spent on making in-country arrangements. In case of visa cancellation or visa rejection, a refund/partial-refund will be considered.
In such cases, a valid proof/reasons of visa rejection/cancellation must be submitted to our office.

14 Days 3-16 People
12% Off
$1,490 $1,690
In the extreme north of Pakistan, Skardu the central valley of Gilgit-Baltistan is an epitome of beauty, serenity, and wilderness. Paths to some of the...
View Details
Available through out the year:

View Details
Available through out the year: